Babies with NAS respond to cuddles from volunteers 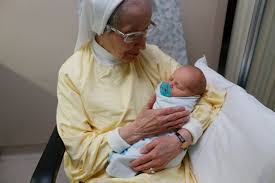 Nurturing a newborn baby can be hard, as well as a lot of work. As a result, thousands of babies in each state are not getting the affection they need causing a syndrome referred to as NAS, also known as Neonatal Abstinence Syndrome.

NAS is a group of symptoms that occur when an infant is born with addiction to opium, heroin, and even alcohol. This syndrome involves symptoms such as: excessive high pitched crying, fever, hyperactive reflexes, rapid breathing, slow weight gain, tremors and seizures.

Babies are born into NAS is when, while in the womb, the mother is using drugs while pregnant and the substances go through the placenta which transfers to the child making the fetus addicted and dependent on the drugs.

Then the babies are born addicted and must experience instant withdraw.

With the opium epidemic getting worse, the birth of babies with NAS is getting worse and doctors are trying to find ways to control and cure the babies side effects of the symptoms.

The Oaks Treatment Center says on their website that “in 2010 7 million people in the US were using prescription drugs unlawfully,  467,000 people in the U.S are addicted to heroin and  resulted 10,574 deaths in the US during the year of 2014.”

With a big jump in numbers, 2016 shows that over 26 million people worldwide were addicted to prescription painkillers and heroin alone. They say more people are on methadone, which is a substitute for heroin that addicts rely on after addiction. Drugfree.org says in an article “in 2010 there were 1,200 babies born with NAS in ohio alone.”

According to BBC, every 25 minutes babies are born with NAS. A woman by the name of Jane Cavanaugh who set up a program where people can volunteer to go local hospitals and cuddle the babies to help them ‘heal’. Cavanaugh says “They need touch, they need soothing, they need talking.”

Shape.com list reasons why cuddling is actually healthy for you and the benefits it has to for your body. “Reduces stress, releases dopamine which get released when you feel pleasure.” Doctors believe that this form of cuddling will give the infants a sense of security, and less anxiety that they are feeling.

Lawrence Andrade, who volunteers to nurture the babies, says “you see the babies and the way they are living when this is supposed to be their time of nurturing and growing a bond with their mothers and fathers and they don’t have the chance to do that because they have something wrong with their bodies that they can’t help.” Babies who are born with NAS usually are born being under 5 pounds and 8 ounces, have breathing problems, and other symptoms that can hurt the baby in the long run.

When the baby is born, they are in instant withdraw and are given naloxone, which is a drug to treat narcotic overdose, another way they try to cure the child is through pharmacologic therapy, but that can prolong the stay of the newborn.

Andrade says “ the baby shouldn’t be given more medicine when it comes to curing, but in the end people just want the baby to be cured and not need to go through what they are.”

The babies usually are in the hospital after birth for a month or so and go under treatment and intense nurturing. The hope is their will no longer be any more babies who are born with NAS and need to live through the struggle the babies do go through with the syndrome.

Doctors and scientist hope to find a possible way to prevent the baby being born with NAS or to make a more effective treatment for the infant so the baby doesn’t need to be in the hospital for as long as they usually are.