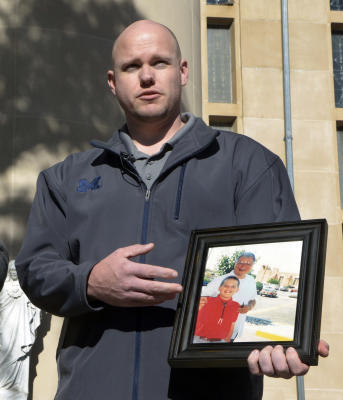 gbs111815r/ASEC -- Ken Wolter of Detroit, Michigan, a New Mexico survivor of childhood sexual abuse by Catholic Priests, at a press conference on Wednesday, November 18, 2015. Wolter holds a picture of when he was a child, and the priest, Art Perrault, who abused him. (Greg Sorber/Albuquerque Journal)

A fugitive priest suspected of sexual abuse in New Mexico and Naugatuck was arrested in New York on September 21.

Arthur J. Perrault is accused of sexually assaulting at least 38 boys in New Mexico. He was charged with six counts of criminal aggravated sexual abuse and one count of abusive sexual contact.

Perrault was assigned to St. Francis School on September 8, 1965. It has been speculated that in less than nine weeks of his employment, he had inappropriate talks with seventh and eighth grade boys. They took place in secluded parts of the church, in the school after dismissal, and in his car.

Perrault left St. Francis in November 1965 to go to a Via Coeli, a treatment center in Jemez Springs, New Mexico for priests with emotional problems. Perrault is one of many priests sent to New Mexico from around the country for alleged treatment of pedophilia.

He was recommended for a teaching post at St. Pius X High School in 1966 by a psychologist under the Servants of the Paraclete, a religious order that ran a treatment center for priests in Jemez Springs.

Records show Perrault was sent to Servants of Paraclete after he was accused of molesting young boys while serving in Connecticut.

Perrault vanished in 1992, days before an attorney filed two lawsuits against the Archdiocese alleging his sexual assault of seven children at his parish.

“The FBI and our partners were determined to make sure he faced justice-no matter how long and how far we had to go to get him,” said James Langenburg, special FBI agent in charge of the Albuquerque office.

The FBI said Perrault first fled to Canada, then to Tangier Morocco, where he worked at an English-language school for children.

Langenburg said the FBI’s investigation began in early 2016 and led to an indictment last year.

The FBI did not release any details on how he was located and arrested by Moroccan authorities.