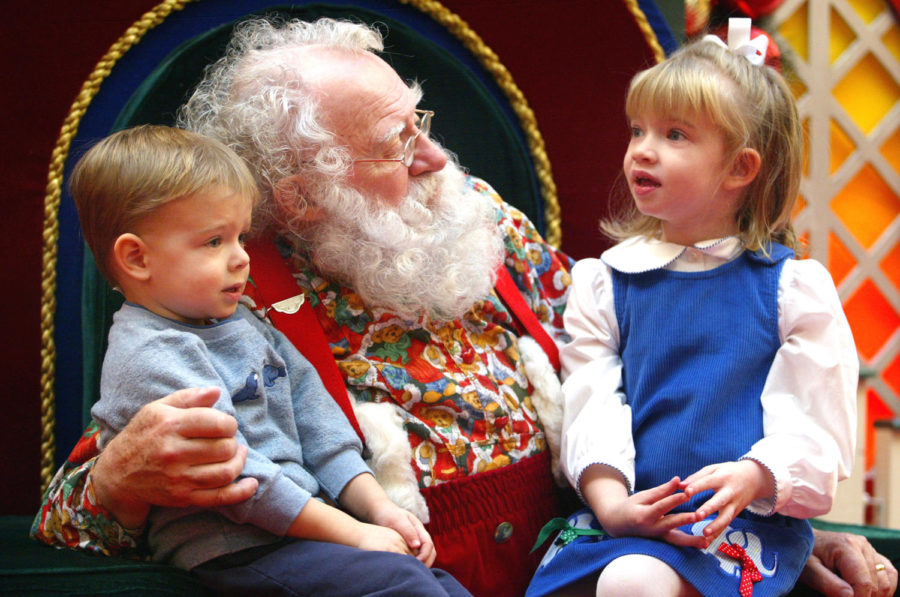 NILES, IL - DECEMBER 19: Sporting a natural white beard, Santa Claus visits with Ian, 2, and sister Devin Rachiele, 4, December 19, 2003 at Golf Mill Mall in Niles, Illinois. Santa says that the children that visit him feel more comfortable when he is not wearing his traditional Santa coat and hat. (Photo by Tim Boyle/Getty Images)

Last week a class of first graders at Cedar Hill Elementary School in New Jersey had their childhood shattered when their substitute teacher told them that Santa wasn’t real.

Michael Raj, principal of Cedar Hill, sent a letter home that day, explaining what had happened in the class and offering his sincerest apologies, as he too has kids and knows the sensitive nature of what was exposed.

In the letter, he wrote, “If the conversation comes up at home over the next few days you can take appropriate steps to maintain childhood innocence of the holiday season.”

After parents received the letter and asked their children what had happened, they took to Facebook to explain more of the situation. It was then revealed that the teacher exposed everything that goes on during Christmas.

Lisa Simek, a parent of a child the school, posted, “She told them reindeer can’t fly and elves are not real and Elf on the Shelf is just a pretend doll that your parents move around.”

In another post by Simek, it was revealed that the substitute ruined more than just Christmas.

“She did not even stop there: the tooth fairy is not real because mom or dad just sneak into your room in the middle of the night and put money under your pillow, same goes for the Easter bunny. She told them magic does not exist. There is no such thing as magic anything.”

Some parents also took to Facebook to express how their children reacted to what the substitute did and how they were going to try to fix it.

Mayra Aboyoun, another parent at the school, posted that her daughter was “heartbroken,” and she tried to reduce the damage by bringing her see Santa while telling her the substitute was “Santa’s evil counterpart and will not be returning.”

She hopes that she can get her daughter back in the holiday spirit.

René Rovtar, superintendent of Montville Township schools of which Cedar Hill is a part, took immediate action. She also sent home a letter to parents regarding the unfortunate situation.

In the letter, Rovtar wrote that she was “troubled and disheartened by this incident.”

A few days later, Rovtar told ABC News in an email that the teacher will no longer be working in the school district.