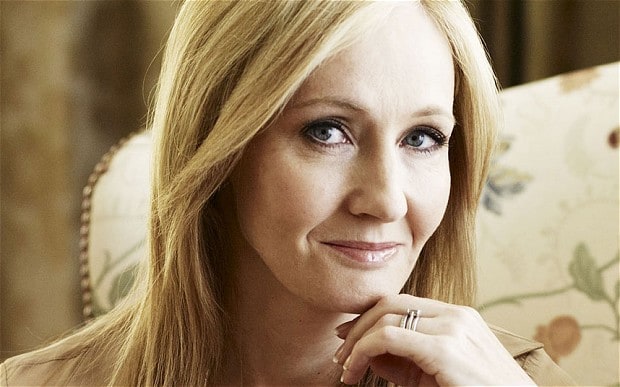 Commonly going by the pen name of J.K. Rowling, the wizard-writing single mother of three children managed to create an entire series of an engaging, imaginative, magical world right in the heart of London. Not only did it gain her an immense amount of fame and establish solid respect for fellow female writers, but it also allowed her to become the wealthiest woman in the United Kingdom–richer than Queen Elizabeth II. She even managed to revive reading for an entire generation of children, coaxing them into the realm that is Harry Potter!

Though it seems as if her life must be easy being a billionaire, it was not always easy for this outstanding woman. The first idea she had about a novel depicting the young wizard occurred to her while she was on a train, but with that little spark of creativity, she began mapping out the seven-book-series on scrap pieces of paper, which piled up to become the series we know as Harry Potter.

Rowling was barely getting by at this point in her life but demonstrated courage as she pursued getting her future hit-novel published after a numerous amount of rejections from various publishing companies.

Even though several publishing companies had denied Rowling’s Harry Potter and the Philosopher’s Stone, there was one small publishing company which saw something in the novel and accepted it. The release of the book was in itself magical, as it exponentially grew in popularity with readers, resulting in both the publishing company, Scholastic, and Rowling herself gaining massive fame.

She intended the book’s second half of the title to be named, “Philosopher’s Stone,” however, after being published with Scholastic, it was altered to “Sorcerer’s Stone,” when published in the U.S.

Rowling did not stop here, she continued to create and produce these intriguing novels until she hit the seventh book of the series. Even then, the series had finished, but she continued to make other extensions to the story of Harry Potter, such as the idea of Fantastic Beasts and Harry Potter and the Cursed Child.

Not only did she greatly benefit from the profit of the books themselves, but she also had several movies created to honor her hard work and bring it to the eye of moviegoers. Furthermore, she has a whole wizard world in Florida dedicated to fleshing out the alternate reality of Hogwarts she created in her books.

But how are you supposed to visit her wizard world in Orlando if you don’t know anything about what Hogwarts house you’d fit into, or what wand you should get? Worry not, Rowling has an entire website dedicated to all the wizardry information you may need and even quizzes that will tell you what you are, and what wand best fits your hand.

On this very website, there’s even a virtual simulation of you exploring a dark forest in order to find your Patronus (an animal which assists you on your journey), and Rowling makes this all available to you through the wonderful site of Pottermore.

Though this series has grown so popular with many readers, a lot of avid readers were skeptical of the series since it had grown popular with many people who didn’t even actively read. Despite this, tons of people who felt this way at first have now become huge fans, such as Carolyne Dymond, NHS English teacher who says, “I was actually assigned to read the first of the series in a graduate course in college. I wanted nothing to do with it; I thought it was just a fad. Immediately after I started reading I was hooked, really within 5 or 6 pages. I think I read it in two nights. I have always loved mythology and that is what I felt like I was reading.”

Rowling has captured the hearts of so many people throughout her series–adults, children, skeptics, critics: you name it. The mere fact that this relentless woman who used to be struggling financially to support her children now has an entire movie franchise, a location, and a website to make her ideas transit into our realm of the world is absolutely phenomenal and a great show of how not only men but women too can be astounding writers.