We are seeing the first ever picture of a black hole 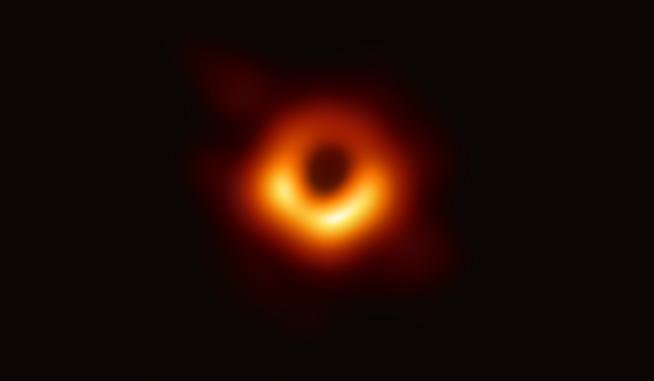 We’ve seen photos of all of our basic planets such as Jupiter, Venus, Saturn and so on, but what about the massive breaks in our solar system that we know as “black holes”? Worry not, the very first photo of these cosmic, life-sucking holes of destruction has finally been taken.

Spawning from when a star begins to die and eventually goes supernova (explodes), black holes take over the space that a star once occupied, eating everything it comes in contact with. In the photo, it is visible from the tangerine ring surrounding the rip in time and space that even light, the fastest travelling formation, cannot even escape its gravitational pull.

The fact that this break in outer space swallows up everything might sound threatening or scary, but fear not, this black hole is 55 million light years away from where we live–meaning it’d take you 55 million years to get to this black hole if you were travelling at the speed of light. Since light travels at a speed of roughly 670 million mph, it would take you quite a long time to arrive to this black hole at your own speed which lies in galaxy Messier 87, located in the Virgo constellation.

Though only one image of a black hole has been taken, that does not necessarily mean there aren’t other black holes in the universe. There is a multitude of these dark abysses in place around outer space, and even one in our own milky way galaxy, however, ours is nothing to worry about as well, considering it is at a shortly further distance of 53.5 million light years away.

Despite that neither of these black holes can cause us harm anytime soon, the image of this black hole taking on the role of a vacuum is still spine-chilling, considering these holes of destruction, like any other planet or intergalactic structure, can fall out of orbit and begin roaming the galaxies freely, moving as fast as 5 million mph.

If this black hole is so far away, how was this photo of it taken? Well, firstly, this dark space rip is several billion times larger than our own sun. Secondly, thanks to technology, scientists were able to take this photo using a collection of radio antennas known as the Event Horizon Telescope, and computer analysis of the feedback from it.

The image amazed and fascinated many scientists all across the United States. During a news conference, Shep Doeleman, an astronomer at Harvard-Smithsonian Center for Astrophysics said,“We have seen what we thought was unseeable.”

A cosmologist-professor for Barnard College in New York, Janna Levin, said, “What a time to be alive.”

Ironically, the image of this life-destroying hole has got more people intrigued more than frightened. However, this advancement in the discovery of space and time likely will not stop here, as we continue to explore the cosmos and explain more of what time and space really is and really means.