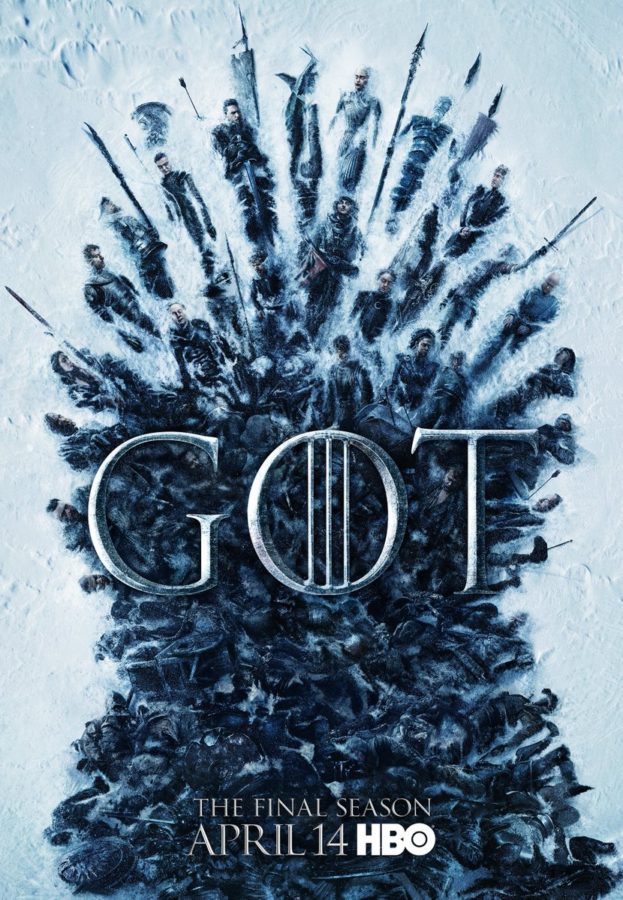 *This article contains spoilers for the first three episodes of the final season of the television series, Game of Thrones, which first aired on April 14, 2019.*

The long-awaited final/eighth season of Game of Thrones has finally aired on HBO on April 14, 2019. Since then, two more episodes have aired on April 21, 2019 and April 28, 2019, respectively, leaving only three episodes left. The final season is set to end on May 19, 2019, where viewers will finally find out who will lay claim to the Iron Throne.

Episode one, entitled Winterfell, drew in 11.76 million viewers and was directed by David Nutter and written by Dave Hill.

Jon has convinced Daenerys, his new love interest, to stall her fight to lay her claim on the Iron Throne, as the White Walker invasion is an impending threat, especially since they have recruited one of Daenerys’ dragons, Viserion. Bran, portrayed by Isaac Hempstead Wright, informs them of this new recruitment as he has become the Three-Eyed Raven, which means he has seen everything in the past, present, and future even if he himself was not present.

When Jon and Daenerys return, the North and their allies rally around Winterfell. They, including Sansa, portrayed by Sophie Turner, distrust Daenerys and doubt Cersei’s, portrayed by Lena Headey, pledge that she will help the North fight and disregard issues surrounding the Iron Throne for the time being. They feel as though they called Jon their new king when he left, but he returned with a queen.

Theon, portrayed by Alfie Allen, rescues his sister, Yara, portrayed by Gemma Whelan, who goes to reclaim the Iron Islands, before leaving for Winterfell to help fight the Army of the Dead, or the White Walkers.

Back at Winterfell, Jon reunites with Arya, portrayed by Maisie Williams, a reunion fans have been waiting for since episode one of the first season. Moreover, Daenerys convinces Jon to ride one of her dragons, Rhaegal.

After meeting Daenerys and finding out she executed his father and brother, since they would not bow down to her, Sam, portrayed by John Bradley, tells Jon of who he really is, Aegon Targaryen, making him the last living male heir to the Iron Throne, and making Daenerys his aunt.

This shocking revelation is confirmed to be true by Bran and the books Sam read in the Citadel.

Tormund, portrayed by Kristofer Hivju, and Beric, portrayed by Richard Dormer, run into Eddison, portrayed by Ben Crompton and several other Night’s Watch members at House Umber’s seat of Last Hearth, finding its residents, including Ned Umber, portrayed by Harry Grasby, who has been killed and been left with a message from the Night King, head of the Army of the Dead.

The next day, Jaime arrives at Winterfell because he has made a promise to help them fight against the Army of the Dead, even if Cersei was lying to them. He then runs into Bran, the child who he pushed out a window when Bran found out Jaime was sleeping with Cersei, leaving him in a wheelchair.

Episode two, entitled A Knight of the Seven Kingdoms, drew in 10.29 million viewers and was directed by David Nutter and written by Bryan Cogman.

At the beginning of this episode, Jaime stands in front of the Targaryen-Stark alliance and tells them about Cersei’s lie. He then joins their forces, amidst distrust from Sansa and Daenerys, because Brienne, portrayed by Gwendoline Christie, contended Jaime’s honor.

Later, Jaime talks to Bran and apologizes for leaving him wheelchair-bound, with Bran saying he is no longer angry and that they are not the same people they once were.

Tyrion, Daenerys’ right hand, loses his reputation for believing Cersei, making Jorah, portrayed by Iain Glen, ask Daenerys to forgive him. Afterwards, Daenerys has a talk with Sansa in an attempt to gain her trust, which she does not receive as she cannot make an guarantees to the North’s fate.

Theon, Edd, Tormund, and Beric all return to Winterfell, revealing House Umber’s fall at the hands of the Army of the Dead. Theon reunites with Jon and has an emotional reunion with Sansa.

In hearing the news of House Umber, Bran suggests he lures out the Night King, who wants to destroy the Three-Eyed Raven. After a lot of disagreement, his plan is accepted, with Theon saying he will protect him at all costs–his way of apologizing for taking Winterfell from Bran in the past.

Gendry, portrayed by Joe Dempsie, finishes making a special weapon made out of dragonstone for Arya, who then seduces him as she wants to know “what it feels like” before battle with the Army of the Dead, which might be her last.

Jorah fails to persuade Lyanna Mormont, portrayed by Bella Ramsey,  into staying in the crypts where it will be safe. Instead, she wants to fight and receives House Tarly’s ancestral sword as a gift from Sam.

As the Army of the Dead approaches outside Winterfell’s walls, Daenerys finds Jon at Lyanna Stark’s tomb (his mother), and he tells her about his Targaryen lineage and claim to the Iron Throne.

Episode three, which was written by David Benioff and D.B. Weiss and directed by Miguel Sapochnik, drew in 12.02 million viewers. This is one of, if not, the season’s longest episode (an hour and a half), featuring the longest battle sequence in cinematic history.

Fans were expecting many of their beloved characters to meet their end this episode, which wasn’t entirely wrong.

The dark (and I mean literally dark) episode opens with the army at Winterfell and the Army of the Dead on the battlefield. Immediately, the living army becomes overwhelmed by the number of the dead, so their defeat seems inevitable.

During the beginning of the battle, Edd dies after saving Sam. He always said he would end up getting one of them killed.

The remaining living retreat into the castle while Melisandre, portrayed by Carice van Houten, uses her magic to light the trench surrounding Winterfell, being protected by Grey Worm’s Unsullied army, in attempts of slowing the advances of the Army of the Dead.

Up in the sky, Jon and Daenerys are riding Drogon and Rhaegal, respectively, who engage the Night King who is riding Visieron. As this is happening, the dead finally manage to breach the wall in Winterfell.

The members of the army in Winterfell soon become overwhelmed, with Lyanna Mormont dying at the hands of the dead giant, who she manages to kill before she dies. Along with Lyanna, Beric also dies sacrificing himself to protect the living, specifically the Hound, portrayed by Rory McCann, and Arya, with many fans saying he kept on being brought back in order to make this sacrifice.

Afterwards, the Hound and Arya find someplace to retreat, where they meet up with Melisandre, who told Arya they would meet again. She then tells Arya about her prophecy, which dates all the way back to season 3.

In season 3, she tells Arya: “I see a darkness in you,” Melisandre tells Arya. “And in that darkness, eyes staring back at me: brown eyes, blue eyes, green eyes. Eyes you’ll shut forever. We will meet again.”

And in this episode, Melisandre asks Arya “What do we say to death?,” to which Arya responds, “Not today.”

This question refers back to Syrio Forel, portrayed by Miltos Yerolemou, the Braavosi water dancer who was the first to train Arya back in season 1. He would always say those exact same words to Arya, until the last time, when he would sacrifice himself so Arya would be able to runaway from Lannister forces in King’s Landing when her father, Ned Stark, portrayed by Sean Bean, would be executed.

Back in the sky, Jon manages to knock the Night King off Viserion while Daenerys is ready set him on fire with the help of Drogon. It turns out the Night King is immune to dragonfire, and raises the Winterfell soldiers who were previously slain. Because of this, the dead in the crypt begint to attack the remaining children and women.

Daenerys is eventually knocked off Drogon due to the dead climbing on him, and her fate seems to be sealed. However, Jorah comes to the rescue, protecting her until he eventually dies on the battlefield.

At the Godswood, Theon is charged by many of the dead, but he manages to defeat all of them in order to protect Bran, the bait for the Night King. The Night King finally arrives and kills Theon, right after Bran calls him a “good man” and tells him “Thank you” for everything that he has done. The Night King then goes to kill Bran, but Arya ambushes him from behind, and he grabs her by the neck, causing her to drop her Valyrian steel dagger. However, Arya still manages to catch the dagger with her other hand, so she stabs the Night King. This causes him and the Army of the Dead to break into pieces.

Fans immediately connected the Valyrian steel dagger to Bran, as it was supposed to be the dagger which killed him back in season 1 after Jaimie pushed him out the window. In season 7, he was the one who gave it to Arya, meaning he knew she would be the one to kill the Night King.

At the end of the episode, Melisandre wanders into the snow and dies from her advanced age, after serving her purpose.

The list of the dead seems to be, thus far,: Lyanna and Jorah Mormont, the Night King and his entire Army of the Dead (including Viserion), Theon Greyjoy, Eddison Tollett, Beric Dondarrion, and Melisandre of Asshai.

Since the Night King and his army is no more, it seems as though the real enemy for the rest of the season will be Cersei, who will do whatever it takes to remain on the Iron Throne.