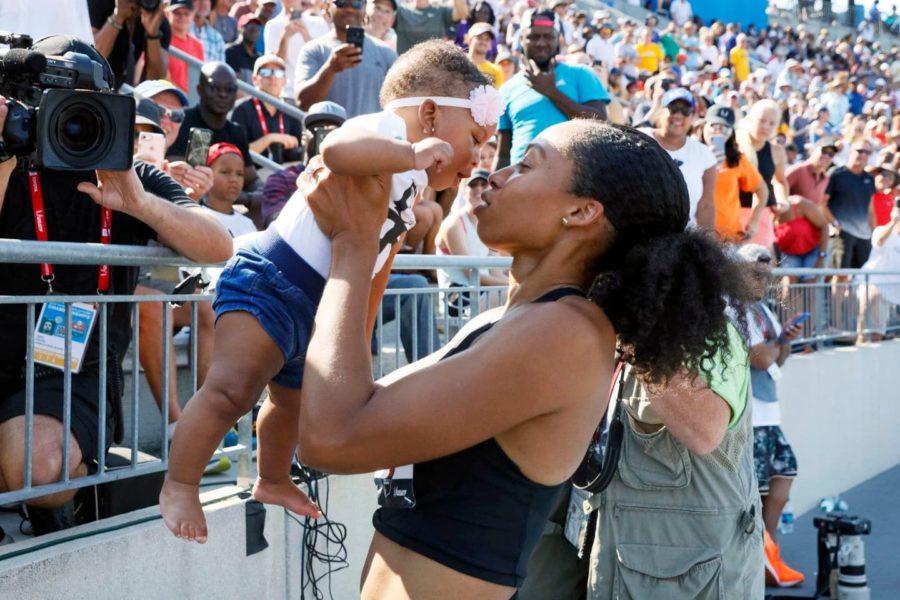 Allyson Felix, 33, the six-time Olympic and eleven-time world champion, had a baby girl in November, and Nike, who sponsored Felix for seven years, did not respond to the news pleasantly. For many years women in track have been told that if they get pregnant they will lose their sponsorship money.

The economy in sports is different in track and field than professional sports like basketball or soccer. Athletes in track aren’t paid enough and get most of their money by sponsorship deals by companies like Nike or Asics.

Felix has spent many years working with Nike but the company stated in May that they will not apply pay reductions for women who get pregnant and instead will give them no money at all.

According to the CNBC interview with Kelly Evans “It’s a big issue for track athletes that their contract is placed on hold and when you return back for competition then your contract would resume. I would like to see performance-based reductions, surrounding pregnancy, so that would mean we have a base salary,” Felix stated.

In a New York Times opinion article, Felix even recounted that Nike wanted to pay 70% less than before because once she gets pregnant she won’t race and if she doesn’t race she doesn’t get any sponsorship money.

Track star athletes like Allyson Felix, Kara Goucher, and Alysia Montano couldn’t stand the sexism anymore, which is why they decided to try to change this for women.

“We recognize that we can do more and that there is an important opportunity for the sports industry to evolve to support female athletes,” Nike said in a statement.

Nike tells the athletes that they will put their contracts on hold and until then they won’t be paid at all. If they want a baby it sounds like the women will be financially penalized if they are planning on having a child.

Many female athletes have been putting their careers on hold to have babies and come back to compete at higher levels. Montano, a six-time U.S. champion, famously raced while she was eight months pregnant to prove to Nike the reality of being a women track athlete.

“The sports industry allows for men to have a full career, and when a woman decides to have a baby, it pushes women out at their prime, ” said Montano.

Montano is pregnant with her third child now and has a sponsorship deal with Cadenshae, an activewear company, which supports her pregnancy.

Montano and Felix and many other women athletes are all standing together for this cause. Felix will also be competing in Doha for the world championship event who won’t be the only mother competing.