Young boy invited his entire kindergarten class to his adoption 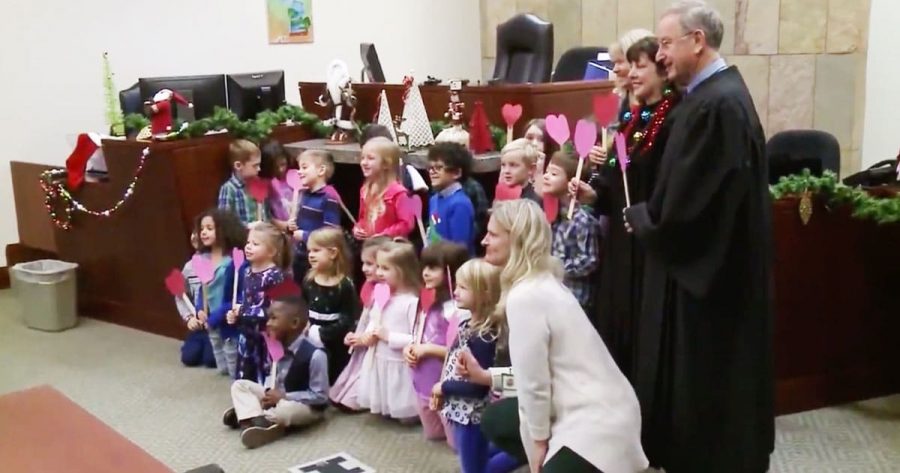 As kindergartners expeditiously wave signs of hearts with a passion, a fellow adopted classmate after he slams hammer, indicating he is finally officially a part of a family.

Michael Clark Jr. was one of 37 children whose adoptions were finalized in a courtroom on December 5, 2019, in Kent County, Michigan, on Adoption Day. Michael first came to live with Andrea Melvin and Dace Easton nearly a year ago, when they were called about a little boy who was in need of immediate placement.

The couple instantly knew that they were making the right decision.

“I was at a conference when my wife got the call and we felt it was the right move,” Eaton said.  According to Buzzfeed, “[She] picked him up an hour later.”

While preparing for the adoption hearing, Micheal asked a special favor from his future dad to bring the whole class saying “they’re my family too” and that they should be there to attend.

The kindergartener, who had been in and out of the foster care system, has boundless energy. He loves sports, is constantly zipping around, and talks to almost everyone, his dad said. When they enrolled him at Wealthy Elementary School in East Grand Rapids, Eaton said, “the school embraced him as one of their own.”

When Andrea Melvin and Dace Easton told the teacher about the idea she thought, why not.

However, they faced a huge problem. The school couldn’t afford a bus.

With quick thinking, “ I emailed the parents asking if six or seven could take off work to drive the kids to the courthouse. The next morning 14 out of 23 offered to skip work and come,” said the principal.

But, “Then the driver there asked what it was for and I told her and she said you can have the bus and I’ll drive for free.” The driver called it the “domino effect” of “magic.”

As the day arrived Michael took a seat with a stuffed animal in his arms. Not shortly after the kindergarteners stormed the room with love.

The judge, Patricia Gardner confused said, “I’ve never seen anything like this in a courtroom.” When the hearing started, she asked each of the classmates to introduced themselves to judge Patricia Garner and telling her how much they care about their classmates.

The kindergartners offered the most touching answers, standing up and telling the court, “Michael is my best friend,” Steven, one of Michael’s classmates, said.

“My name is Lily, and I love Michael,” another girl shared according to The Hill.

Nearing the end, the judge called the new family to bench. Allowing Michael to hit the hammer to approve his new family. The classmates approved too cheering him on.

While everyone had tears shredding from their eyes including the judge had more when Micheal interrupted his mother while doing an interview “I love my mommy!”

“The lesson is put a little love in your heart. We rise when we support others,” said their teacher, Kerry McKee.