The justice system continues to fail people of color 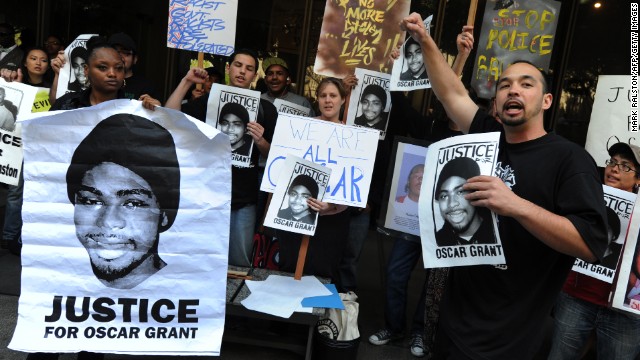 “There is always going to be White superiority, so any minority or group that isn’t White will always be biased against. White superiority has been ingrained in society and it’s extremely prevalent in the judicial system,” said Vicki Weng, a junior at Naugatuck High School.

On January 1, 2009, Oscar Grant, 22, was murdered by a White police officer, Johannes Mehserle, in Oakland, California. He was fatally shot while lying face down on a train platform.

Oscar Grant’s name became another symbol of excessive force by law enforcement against an African American.

The Sixth amendment to the Constitution guarantees the right to a speedy trial. Kalief Browder, a sixteen-year-old boy was held at Rikers Island, one of the most notorious prisons in the world, for 3 years pending his trial for stealing a backpack. His bail was set at $3,000 and his family could not afford it.

Theft is only a misdemeanor, and, if convicted, he would have spent less than one year incarcerated. However, he spent over 1,000 days in prison. Seven hundred of those days were in solitary confinement. His court date was postponed over 30 times; he was never given a trial or convicted of a crime.

While in Rikers, Kalief Browder endured brutality from the corrections officers and inmates.

In 2017, Netflix released Time: The Kalief Browder Story, which showed footage of corrections officers physically assaulting Browder without him provoking it. The officers would claim that he was being resistant.

Browder was given various plea deals, but he rejected each of them. He maintained his innocence throughout his whole case.

In 2013, after 31 court appearances with 8 different judges, Browder’s case was dismissed and all the charges against him were dropped without ever going to trial.

Browder struggled to assimilate back into society.

“I didn’t get to go to prom or graduation. Nothing. Those are the main years. … And I am never going to get those years back. Never. Never,” said Browder in an interview with ABC.

Browder tried to be successful and get his life back on track. He earned his GED and went to Bronx Community College where he kept a 3.56 GPA. While trying to gain some normalcy, he battled with mental health issues induced by solitary confinement.

On June 6, 2015, two years after his release, he hanged himself outside his bedroom window.

Ideally, the justice system would improve over time and become more equitable, but, instead, it continues to fail people of color.

Rightfully so, the news of Breonna Taylor’s death sparked outrage across the United States. She was fatally shot on March 13, 2020 and for months her family pushed for criminal charges against the officers in her case, demanding some form of justice.

Her case finally began to draw national attention in May, two months after she was killed.

Breonna Taylor, 26, a Black EMT,  was shot by Louisville police officers during a botched raid on her apartment. The plain clothes officers executed a no knock warrant and Taylor’s boyfriend fired shots at the police because he thought there was a home invasion in progress.

The officers responded with 25 bullets, 8 of them hitting Taylor.

A grand jury indicted one of the officers,Brett Hankinson, for three counts of wanton endangerment for firing shots that threatened the safety of others who lived in apartments near Taylor. He pleaded not guilty.

No charges were announced against the other two officers, Jonathan Mattingly and Myles Cosgrove who shot Breonna Taylor, and no one was charged for causing Taylor’s death.

Trayvon Martin, a seventeen-year-old African American boy, was also denied justice. He was fatally shot on his way home from a convenience store on February 26, 2012, in Sanford, Florida by George Zimmerman.

The jury in the case deliberated for 16 hours and 20 minutes over two days and George Zimmerman was acquitted of all charges.

“Black Lives Matter is our call to action. It is about replacing narratives of Black criminality with Black humanity. It is a tool to reimagine a world where Black people are free to exist, free to live, and a tool for our allies to show up for us,” said Patrisse Coullors, one of the co-founders of the movement.

A year later, the movement went viral during the 2014 uprising in Ferguson, Missouri, when Michael Brown, 18, was fatally shot by a police officer.

In the same year, Tamir Rice, 12, and Eric Garner, 27 were both killed at the hands of law enforcement. One for playing with a toy gun in a public park and the other for selling cigarettes.

People began protesting with only one simple demand: Stop Killing Us.

According to The Washington Post, “the rate at which Black Americans are killed by police is more than twice as high as the rate for white Americans.”

African Americans only account for about 13 percent of the U.S population, but according to ncbi.nlm.nih.gov account for 32 percent of people killed by police. The fatality rate is also 2.8 times higher in Blacks than Whites.

According to blacklivesmatter.com, Black Lives Matter is an ideological and political intervention in a world where Black lives are systematically and intentionally targeted for demise. It is an affirmation of Black folks’ humanity, contributions to society, and resilience in the face of deadly oppression.

The Black Lives Matter or BLM Movement is viewed as more of a human rights movement rather than a civil rights movement. BLM has been less focused on changing specific laws and more focused on fighting for a society where Blacks are free from systematic dehumanization.

The movement is not demanding any special treatment for Black people; it is demanding equality and justice for instances where Black people are wronged in the hands of the law or even other people.

Studies have shown that African-American victims are 14.8 percent more likely to be unarmed.

Black people are not able to return home after buying snacks without worrying about making it home safe and alive due to the color of their skin.

They are not able to sleep in their beds without worrying that a police officer who has an oath to serve and protect won’t kill them gratuitously.

Black people should be able to take the subway home after celebrating a holiday.

The United States was built around the concept of life, liberty, and the pursuit of happiness, but law enforcement and the justice system are depriving African-Americans of the right to live.