Biden and Harris begin to govern, and America should let them 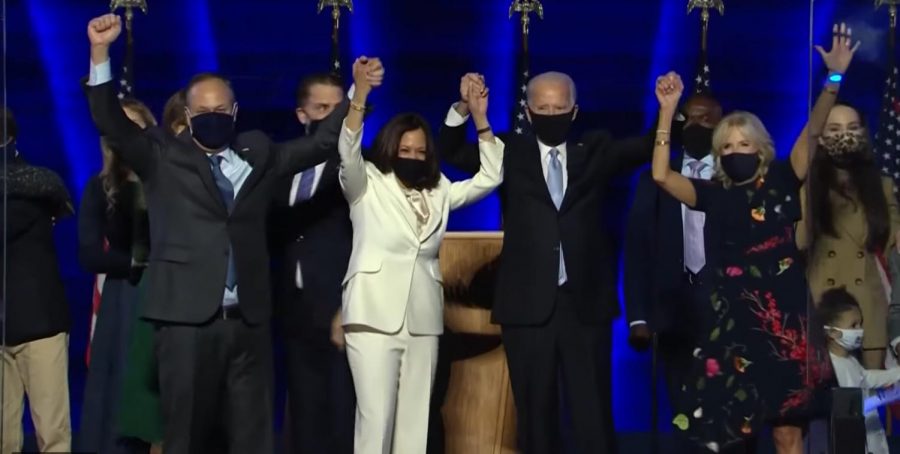 Saturday was an extraordinary day for the Biden-Harris campaign, after an election, that will go down in the history books, was finally called for the Democrats, who defeated Republicans Donald Trump and Mike Pence for the presidency.

After a rigorous few weeks leading up to the election, along with the waiting game that was needed after the election, the Democratic party flipped Pennsylvania, Michigan, Wisconsin, Georgia, and Arizona to seal its win.

With that said, Joe Biden and Kamala Harris have a lot of work to do with mountainous problems such as tackling Coronavirus, killing the roots of systemic racism, and fighting climate change, which is just a fraction of what they have to clean up in this country.

“I don’t see red states and blue states. I see the United States,” is what Joe Biden repeatedly said along his route to the presidency as well as in his acceptance speech on Saturday night.

This needs to be a crucial point in his presidency because not only does he have serious problems that he needs to fix, but he also needs to reunite a divided union and to bring back the vision that the rest of the world has of the United States of America.

People around the world see the United States of America as the place where you can pursue your dreams and achieve liberty, and freedom. Right now, though, our country is divided, and that picture of what America is supposed to be is not clear.

As the American people, we should be excited for our new President and Vice President-elect, but we also have the responsibility to hold Joe Biden and Kamala Harris accountable. We voted for these two because, unlike Donald Trump and Mike Pence, they have a very detailed plan, built around fixing very serious topics in our country and the world today.

“I think you should always be excited when there’s a new president and vice president in office,” one student at Naugatuck High School said in an interview. “However, I don’t agree with a lot of their views and what they do, so I just hope that they prove me wrong and I will support them until I am shown why I shouldn’t.”

Even if they are a republican and voted republican, they should support our president, whomever it may be and this high school student showed a good example of that idea. Every American should feel this way whether democrat or republican.

Some of what Joe Biden and Kamala Harris have planned to do is provide many well-paying jobs for people who have fallen to unemployment due to COVID-19. They have also planned to follow science to fight the Coronavirus pandemic. They have a seven-point plan focused on taking certain precautions to open the country up again according to Joe Biden’s website.

Both of these plans are crucial to the American people, in that it will revamp the economy which was previously hammered due to the virus, and it will get America back on track to the America we once remembered.

They also plan to tackle plenty of human rights issues such as solidifying Roe v. Wade as a federal law across the United States. The Biden-Harris administration also plans to tackle racial inequality by increasing funding to HBCUs and providing free college education to people who live in a household that brings in less than $125,000 a year. They plan to fight for many more inequitable situations across the U.S. such as Native Tribal Group rights, LGBTQ+ rights, and rights for people of color.

I talked to another high school student who liked most of the Biden-Harris plan and he said that he wanted to see Joe Biden and Kamala Harris fight harder for the problems regarding human rights and the environment over problems regarding the economy.

“I’d like to think that relations with other countries will improve and America will start taking steps to protect the environment over the economy,” the student said regarding the transition in power from Trump and Pence to Biden and Harris.

“I think we should stop them from doing everything that we let Donald Trump get away with. We should not idolize them, and keep their statements true,” the student explained. “Holding them accountable for the past is necessary and exposes a pattern of behavior and could show early signs of abuse of power.”

We, as American citizens, must not allow the state of the presidency to get to the level of irresponsibility, and disrespect that it got to with Donald Trump in office, and we must do that by holding the people of office accountable for all their actions, no matter who it is.

With the pressure of all the American people on their backs, and a good team behind them, they can follow through with most of their plans, even in these unprecedented times of uncertainty. They certainly do not have an easy task at hand, though.

Can Joe Biden and Kamala Harris handle the pressure of the situation that they are being put into, or will the United States of America continue down the path of reluctant fate?