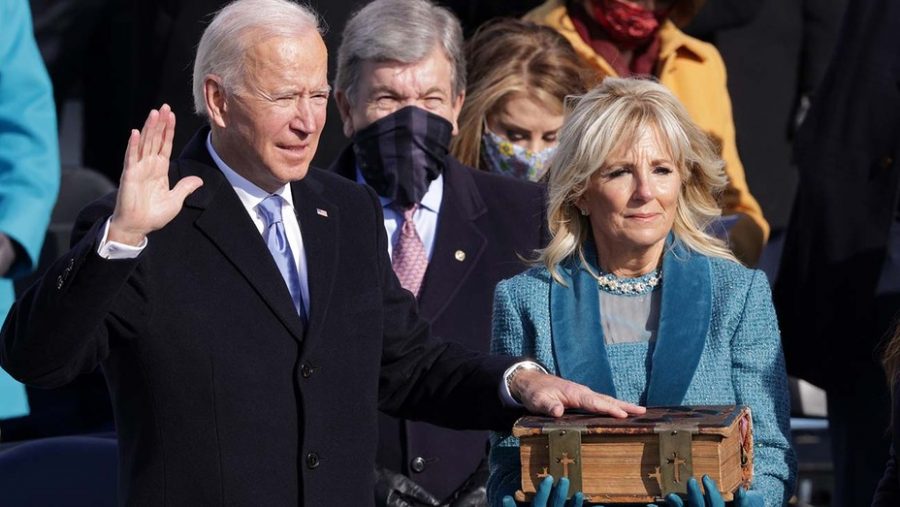 On January 20th, 2021 Joseph Robinette Biden was inaugurated and became the 46th President of the United States. Many anticipated the day when Trump would go home, leaving the White House and having Biden move in.

After Donald Trump, former president, refused to formally concede to or host Biden at the White House on the morning of his inauguration, Biden and his family walked on the White House grounds for the first time since the win of the election. Along with them was Kamala Harris, who made history after being sworn as the first female, black and South Asian vice president of the United States.

Even with all the riots that happened in Washington DC, Biden and his family celebrated his moment by watching the massive, memorable fireworks show from the White House.

Trump always had a bitter, alienating tone when it came to making speeches or tweeting on social media which included lies, threats, bullying and informal language which led to the riots and insurrection of the Capitol, the first week of the new year.

On the other hand Biden’s inaugural speech states, “Politics doesn’t have to be a raging fire destroying everything in its path.”

“I am relieved and feel much safer and much more cared for with the Biden/Harris administration in the White House.  I think this team puts people first – just look at his Executive Orders – rejoining Paris Climate Accord, forging a new relationship with WHO, strengthening DACA, reversing the Order to ban transgender people from the military – they are all about the American citizens, our protection and our rights,” said Mrs. Carolyne Dymond, a teacher at Naugatuck High School.

Mrs. Dymond went on to speak about how she feels what President Biden and Vice President Kamala Harris, as the new leaders of this country, will do to bring this nation together.

“I think they will try, but this is sadly a very divisive country right now. There are many people who will see him as a failure no matter how successful he is. They just want Trump back.  Time will tell. However, I do think he is the leader we need right now – compassionate, patriotic, and compromising.”

After being inaugurated, Biden and his team started working right away and signed 17 executive actions to take actions on the coronavirus pandemic. Biden told reporters he is “keeping the promises” although there is “a long way to go”.  For example, one of Biden’s top priorities is passing a $1.9 trillion Covid-19 relief bill after millions of employers were left unemployed or struggled due to the economic collapse.

Biden also wants to bring everyone together at peace after the racial injustice the country faced as well as the police brutality. To address racial disparities in the country on issues such as health, policing, advancing economic quality and having a fair criminal justice system, Biden has laid out a full plan. For example, plans to invest $50 billion in venture capital specifically for Black and brown entrepreneurs, put $100 billion toward low-interest loans and provide educational and development opportunities for new entrepreneurs and students.

On Inauguration Day many Americans got to see the celebration of diversity as well, which was never seen from the country’s leadership in recent years. Kamala Harris represented as the first female, black, asian vice president, Amanda Gorman recited her original poem and Jennifer Lopez performed ‘This Land Is Your Land’ including some lines in Spanish.