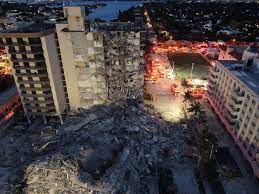 On June 24th at 1:25 AM in Surfside, Florida a tower partially collapsed, killing 98 and injuring 126. As of now National Institute for Standards and Technology (NIST), who has been investigating the cause of the collapse, has only theories as to why the 40 year old Champlain Tower South collapsed.

NIST has been tasked with culling through the standards and regulations required at the time of the Champlain Towers construction, the 13th floor addition which was not originally planned, the constant changing of the blueprints and original building plans, and the gradual erosion of the property.

The tower collapse began when the pool deck fell about 10 minutes before the collapse at about 1:15 AM. The collapse of the pool deck is rather unexplained at this time, however the pool deck was in poor condition as well as the parking garage supports beneath it.

Just after the pool deck collapsed a resident on the second floor of the tower, Sara Nir, went downstairs to report multiple banging noises to a security guard stationed in the lobby, NIST would find out later due to a video taken from across the street that the banging from underneath her condo was the ceiling and support beams below falling.

Nir’s children aged 25 and 15 who were both in the condo with her when she left met her in the lobby, after seeing parked outside fall into the parking garage below Nir and her kids fled the building likely saving their lives.

Nir’s son, age 25, placed a phone call to 911 at 1:19 AM right before the building partially collapsed. 6 minutes later the building crashed down making the ground shake, “It looked like just white dust. You literally could feel the ground shaking” said Nir’s Son.

Many who heard the pool deck collapse already evacuated; however many remained in the standing portion and many were trapped under rubble. In the nearly one hour long body camera footage you can hear many people screaming in the collapsed parking garage below. Others who were in the standing portion of the building on a balcony, were using a flashlight to try to signal help from responders below.

NIST and many others are puzzled as to why the building would fall after standing strong for 40 years. However, In 1981 Champlain Tower North was constructed to be nearly identical to its sister building Champlain Tower South.  Many residents of the North tower asked if it is safe to reside in the tower due to the construction being similar to the South tower, town officials of Surfside have already deemed it safe however many residents of the tower are not at ease as the two towers were built by the same contractor and teams and are near identical to each other. According to the board members from the North Champlain Tower the north tower is not at risk of collapse.

As of September 13th NIST has yet to make a press release, however most engineers have stated that there will be multiple causes and problems which led to the collapse of the building.