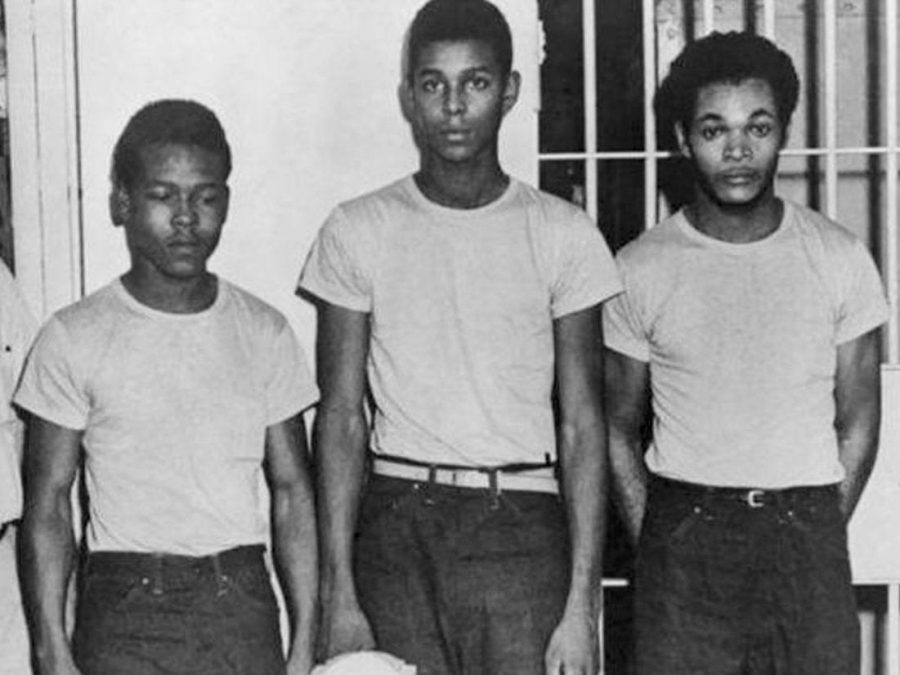 Seventy-two years after the crime, on November 22nd, 2021, the Groveland Four were posthumously exonerated and received an apology from the state of Florida. Three young Black men and one teenager would be accused of raping a 17-year-old white girl.

On July 16th, 1949, in Lake County, Florida a young white couple, Norma Padgett and her husband Willie Padgett had gone out drinking and dancing at a local American Legion Hall, and on their way home their car broke down. According to the Padgetts, four Black men would stop to help them, two of them they identified as Samuel Shepherd, Walter Irvin, and “two other Blacks” would later be identified as Charles Greenlee and Ernest Thomas.

The encounter quickly escalated and the four men would beat Willie Padgett on the side of the road then drive off with Norma Padgett in the car. The next morning Norma Padgett would end up in Okahumpka, 15 miles north from Groveland, Florida. She would tell the person who found her that she was abducted, and she would tell police that she was raped by the four men in the car on a dark road in Okahumpka.

Within hours of the accusation Greenlee, Shepherd, and Irvin would be jailed, and Thomas would flee the county. On July 26th, 1949, while he was sleeping under a tree, he would end up being shot and killed on the spot by an angry mob of white men in the woods180 miles away.

The news continued to spread and a mob of over 100 white people would go to the Lake County jail to demand that Greenlee, Shepherd, and Irvin be released to them. According to some witnesses,  Sheriff McCall’s response to the gathered mob was to go home and let the law handle it, while others say that Sheriff McCall had lied to the mob and told them that the three men had been transferred to a state penitentiary when they had still been in the Lake County Jail.

When the mob was turned away from the jail they went on a rampage and turned their anger onto the Black community in Groveland. Residents would be shot at and their homes burned down; Black residents feared for their lives.

Greenlee, Shepherd, and Irvin were tried. Despite there being no medical evidence of Mrs. Padgett being raped, the all-white jury found the three men guilty. Samuel Shepherd and Walter Irvin, who were both 22 years old at the time received the death penalty, and 16 year old, Charles Greenlee received life in prison.

The work of the NAACP and Thurgood Marshall, a lawyer of the NAACP, would allow for a retrial in 1951. While the three men were transported back to Lake County, Florida from the state penitentiary, Sheriff McCall shot and killed Samuel Shepherd and wounded Walter Irvin.

On November 13th, 1952 Irvin had a retrial that resulted in another death sentence from, again, an all-white jury. In 1955, his sentence was reduced to life in prison by Florida Governor LeRoy Collins. Walter Irvin would be released from the state penitentiary in 1968; however, he would sadly pass away a year later from a heart attack, at only 39 years old.

Charles Greenlee was released on parole in 1962, and lived with his family in Nashville Tennessee, until he passed away at 78 years old on April 18th, 2012.

In April 2017, The Florida House issued a posthumous apology to the Groveland Four for the mistreatment and wrongful convictions.

“This resolution is us simply saying ‘We’re sorry’ understanding that we will never know nor be able to make up for the pain we have caused,” said Representative Bobby Dubose, a bill sponsor.

An independent investigation was held that found the men innocent and in January of 2019, and that Mrs. Padgett had not been raped at all. There would be a full posthumous pardon by Florida Governor Ron DeSantis and the state’s clemency board. Governor Desantis called their case a “miscarriage of justice.”

Mrs. Padgett, now in her 80s still sticks with her story, and at the clemency hearing in January of 2019, she asked for the four men not to be pardoned.

The families of Charles Greenlee, Ernest Thomas, Walter Irvin, and Samuel Shepherd were finally able to get closure on November 22nd, 2021, when they were exonerated.

Administrative Judge Heidi Davis dismissed the indictments of Ernest Thomas and Samuel Shepherd and cleared the convictions and sentences of Charles Greenlee and Walter Irvin.

Carol Greenlee, the daughter of Charles Greenlee, the youngest of the Groveland Four, gave a heartwarming speech at a press conference the morning following the court hearing. “I would not hate, but I will love and embrace all of those who did not know at the time that my father was a caring and loving and compassionate person that did not rape anybody. I stand here today to say thank you,”

While the four men have since died and weren’t able to see themselves get the justice they deserved, they are able to rest in peace and their legacy continues to live on through their families who continued to advocate for them till the end.

Ernest Thomas’s nephew, Aaron Newson, said “ We are blessed. I hope that this is a start because a lot of people didn’t get this opportunity. Maybe they will.” He began to cry when he said, “This country needs to come together.”